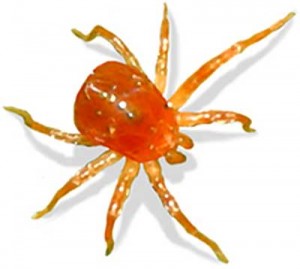 Spring is here and soon it will be summer, which means that people will be traveling more, whether it is to a newly opened cottage or to visit family or whatever. That’s great but there is a downside to travel and no I don’t mean the packing and the leaving early to avoid traffic or the sunburns and mosquitoes (although mosquitoes are a pain and there will undoubtedly be a blog post about mosquitoes shortly). I am talking about BED BUGS! Bed bugs can travel–they are sneaky little pests and if you aren’t careful you may just end up with an unwanted souvenir from your trip.

You have probably heard about bed bugs but do you actually know what they look like or what they actually are and how to figure out if you have them? Bed bugs are small parasitic insect, commonly compared in size to that of an apple seed. They have oval-shaped, reddish-brown bodies and no wings. The common bed bug or Cimex Lectularius, generally grow to 4–5 mm in length and 1.5–3 mm wide.
For those who are traveling this spring or summer here are some tips for helping to prevent bringing anything home with you.

1. Always inspect the room and furniture for blood spots, bug droppings or live insects–if you find any evidence of possible bed bugs then request a new room. Bedbugs like to hide in places like cracks, crevices, folds, and ruffles. Use a flashlight if you have to in order to thoroughly check for any signs of bed bugs.

2. Pack your clothing in over sized, resealable plastic bags before packing them and keep your belongings in the bags or hanging up during your trip (don’t put things on the floor or bed). Use a luggage rack to store your belongings during your stay in hotels.

3. Before leaving the hotel, inspect all your belongings and luggage carefully

4. When you return home, inspect your luggage and belongings again (it’s recommended you do this outside as a precaution) or if its too cold outside, use your bathtub as bed bugs have a hard time climbing smooth surfaces. Always wash your clothing in the hottest water possible before putting them in the dryer for at least 30 minutes.
Also I cannot stress this enough, but ANYONE can get bed bugs. All it takes is a stay in the wrong hotel, a visit to the “wrong” friend or a trip on the wrong plane or cruise ship, for starters.

If you unfortunately do wind up bringing some unwanted visitors home with you, give Cottage Country Pest Control a call at 705-534-7863 or email us. It’s important that as soon as you think you have an infestation or if you know you do, to treat it quickly and properly. The longer you wait, the harder and more expensive it can be to treat later.